Oliver Havers of British Quality Pigs has been unveiled as the 2019 National Pig Awards Trainee of the Year. Oliver was handed the award by comedian Marcus Brigstocke at a prestigious ceremony at London’s Lancaster Hotel on Monday night (November 18).

Oliver joined the BQP Growing Team in December 2017 on an apprenticeship working alongside the field staff who oversee the straw-based growing operation. BQP currently own over 60,000 outdoor breeding sows and have over 300,000 growing pig places spread over East Anglia, and the rest of England. Oliver has been working in the pig industry for the last six years working on the family’s local pig unit in his spare time and school holidays. At 18 years old, he finished at Stradbroke High School two years ago. He worked with BQP during a two-week work experience in year 10, working alongside Stephen Bennett and Mark Jagger. 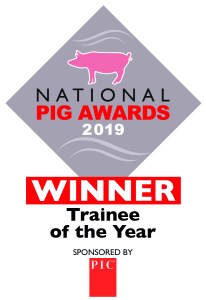 The judges said: “Oliver is a remarkable young man whose achievements should convince anyone that training gives value for money. He is capable and uses his quiet confidence to convince his finisher Agistors of new and improved management techniques which greatly benefit them and the overall business.”

The National Pig Awards are staged annually by Pig World and Lewis Business Media to recognise excellence and innovation in the pig sector. This was the biggest event yet with around 450 people from across the industry in attendance.

Pig World publisher Simon Lewis said: “Congratulations to Oliver Havers who was the deserved winner on the night. Once again these awards have highlighted the breadth and depth of talent, drive and ambition in the pig sector and is a pleasure to recognise the winners, but also all of those shortlisted, which, in itself, is a great achievement.”

Head judge Stewart Houston said: “As always, every category posed some real dilemmas for the judges, such was the excellence of all the entries. But congratulations to all the winners, who each managed to demonstrate something different and special about their businesses.”